The knitted antlers and moose cloth. 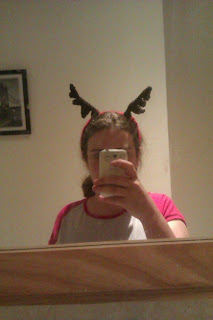 It is my sister's birthday today. For Christmas my sister wanted a knitted beard and she asked for the muff to go with it after Christmas (let's be honest- she just wanted something called a 'muff'). For her birthday she didn't ask for anything specific so I had a think what she would like. My sister likes to call herself moose, mooser, moosehead, bronnimoose and any other link to a moose so I went for a moose theme.

For the wash cloth (or whatever you want to call it) I used this pattern. It only took an evening to make, and I think it looks quite cool, don't think the picture really does it justice. I thought she would want something practical (to wear to the pub or something) so I made some antlers. I made them from a kiddies toy pattern and added a headband. She has messaged me this morning to say the only time she has taken them off is for the school run as her son wouldn't let her keep them on!

I am now half way through a Postman Pat jumper so will hopefully be updating that on the weekend.
Posted by SClubBethan at 04:30 1 comment: 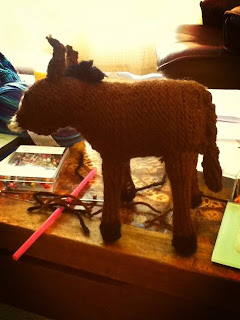 The next instalment in the Nativity I am knitting for my friend was the donkey. I gave it as a present for her wedding last weekend (not the only present- I did do all the wedding flowers for her too!) The pattern is from Jean Greenhowe's Christmas Treasures. I didn't have any grey wool, but Google informed me that donkey's can be brown too- and I don't think they specified what colour the donkey was in the bible. He does stand up due to straws in his legs so he won't be a wonky donkey.

I am busy knitting lots of socks at the moment , and after that I have a Mohawk to do for my sister's birthday next week (to go with her beard. I am then getting back on the jumper knitting for Christmas- only have about 7 more to do, it's lucky they're my favourite things to make at the moment.﻿
Posted by SClubBethan at 10:03 No comments:

SClubBethan
Cheltenham Spa, United Kingdom
This is my knitting blog. I do share my knitting progress with Twitter but have decided to write a bit more about what I am making.